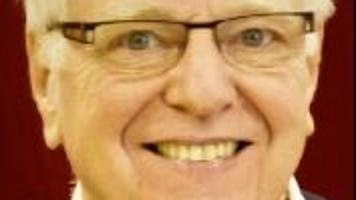 After graduating high school, Jack went on to attend Juniata College for his undergraduate degree and then The Ohio State University for his Doctor of Optometry degree. After gaining his optometry credentials, Jack joined the Navy “to see the world” but only got as far as Norfolk, VA and the U.S. Naval Hospital in Quantico, VA.

Jack eventually found his way to Lancaster County where he owned and operated his own successful Optometry practice for 44 years in Columbia. His skillful and gracious hands helped many patients through those years. During this time Jack was a member of the Lancaster Co. Optometric Society and at one point served as President. After retiring, Jack’s strong desire to give back lead him to volunteer for humanitarian missions in eyecare, traveling to Indian reservations in South Dakota, and many trips to the Appalachian areas of Kentucky, Tennessee, and Virginia. His humanitarian efforts were not restricted to the U.S., as they also took him to places like Ethiopia and several trips to Haiti.

Jack will be remembered as a very gracious and kind individual who worked tirelessly to comfort others and help in whatever capacity he could. His family will forever treasure the memories created with him and he will be missed by them and all who had the opportunity to know him. Jack’s presence and memory will live on through the eyes of all who cherish his memory.

Jack leaves behind two daughters: Kirsten Kepple and Alison Kepple Connors (Blake); two grandchildren: Morgan and Reece; and a niece: Carol Curry. In addition to his parents, he was preceded in death by two brothers: Glenn Richard Kepple and Larry Kepple.

Family and friends will be received at the Charles F. Snyder, Jr. Funeral Home, 3110 Lititz Pike Lititz, PA 17543 on Saturday, April 10, 2021 from 2pm to 4pm. A funeral service will immediately follow with Rev. Dr. Stephen Fritz officiating. Jack will be laid to rest at the Wayside Presbyterian Church Memorial Garden privately with his family. In lieu of flowers, memorial contributions in honor of Dr. John C. Kepple, O.D. can be made to the National Brain Tumor Society, 55 Chapel Street, Suite 200, Newton, MA 02458 with memo line referencing Dr. John C. Kepple, O.D. Memorial contributions can also be made at https://nbtsevents.braintumor.org/johnkepple.