Most of us know that if we don’t protect our skin from the sun, it will burn and leave us vulnerable to damage.

But what few people realise is that the sun’s effects can be even more damaging to our eyes.

In fact, research by the Australian Skin Cancer Foundation found that eyes are ten times more sensitive to the sun’s invisible ultraviolet (UV) rays than skin.

Not only can your eyeballs themselves get sunburned, leaving them feeling sore and gritty, but prolonged exposure to bright sunlight is thought to hasten the onset of conditions that threaten sight, including cataracts (when the lens of the eye becomes cloudy) and age-related macular degeneration (when central vision deteriorates). 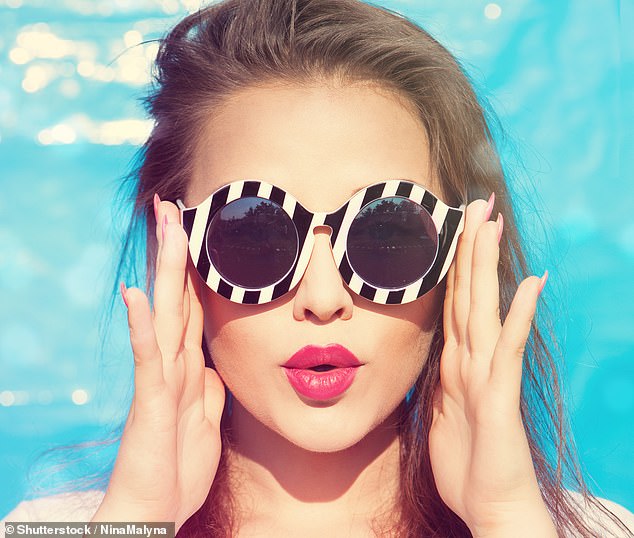 Most of us know that if we don’t protect our skin from the sun, it will burn and leave us vulnerable to damage. But what few people realise is that the sun’s effects can be even more damaging to our eyes

Both of these are linked to ageing, but excessive exposure to UV rays may increase the risk of them developing.

Meanwhile, 10 per cent of all skin cancers occur on the thin skin of the eyelid, according to the American Academy of Ophthalmology, and cancer can occur on the eyeball itself.

‘It’s imperative that we protect our eyes from the sun by wearing UV-blocking sunglasses,’ says Samer Hamada, a consultant ophthalmic surgeon at the Queen Victoria Hospital NHS Foundation Trust in East Grinstead, and Eye Clinic London.

As with the skin, it is the sun’s ultraviolet rays — UVA and UVB — that damage the eyes.

‘UVA rays contain high levels of radiation energy which can go through the cornea, the clear front window of the eye, to reach the retina at the back of the eye,’ says Mr Hamada.

‘UVB rays can damage the cornea itself — this is known as photokeratitis — and is like sunburn of the eye itself.’

Also known as snow blindness, sunburn of the eyeball can be very painful and cause long-term damage if it is repeated often, says Roshni Kanabar, an optician in St Albans, Herts, and clinical adviser at the Association of Optometrists.

When buying a pair of sunglasses, ‘look for the European Standard ‘CE’ or a label saying UV protection against UVA and UVB or UV 400′, says optician Roshni Kanabar. This means that the sunglasses have passed safety standards.

Often fake designer or fashion-style sunglasses do not have these labels, so they would not protect your eyes, says Roshni Kanabar.

‘In fact, wearing dark glasses without UV protection could even damage your eyes. That’s because they make your pupils dilate, letting in even more light, so making things worse if the lens has no UV protection.’

‘Patients may experience bloodshot, sore eyes which are hyper-sensitive to light because the cornea has been damaged, and some describe a feeling as if sand is in their eye when they blink.

‘This damage is usually short-lived, and discomfort can be eased with lubricating eye drops.’

UV damage is also thought to cause the eye conditions pinguecula and pterygium, when lesions appear on the conjunctiva (the white of the eye).

This can cause blurred vision over time and the lesions need to be surgically removed, as they may grow in size and affect vision.

Some people’s eyes are more prone to sun damage than others — a lot depends on the colour of your eyes. People with lighter-coloured eyes (blue, green or hazel) have less pigment to protect them against UV rays, so are at higher risk than those with brown eyes.

But whatever the colour, the simple way to avoid any harm is to always wear sunglasses between March and September, says Roshni Kanabar — even on more overcast days, as UV rays still penetrate cloud cover.

‘To protect our skin we are often advised to avoid overexposure to the sun between 11am and 3pm when it is at its most intense,’ she says.

‘But for eyes, the damage can be worse at other times of the day; that’s because when the sun is overhead, your brow helps shield them from direct sunlight — but when the sun is lower, it can get into the back of the eye more easily.

‘So I advise people to wear sunglasses until it gets dark — and especially in the early evening when the sun is low in the summer sky.’

And there are key rules to stick to when it comes to buying a pair. 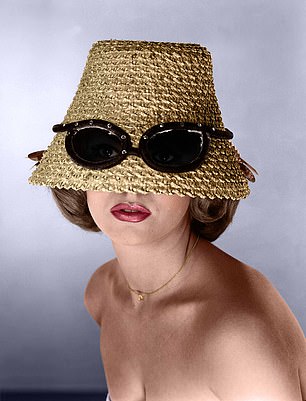 For some, less light reaching their eyes feels more comfortable, so it’s down to personal preference and what you are wearing them for

‘The key is not the price tag but, instead, labels that prove UV protection [see box],’ says Roshni Kanabar.

The frame size is also important. ‘You should ideally choose bigger sunglasses than your normal frames, as these will increase protection for the skin,’ says Roshni Kanabar.

‘The wrap-around style offers better protection around the sides and top, where some light can still reach the eye. If you are out for a long time on a hike or bike ride, say, then this is especially important. For children, goggle-style ones might be more practical.’

She says people often think it is how dark the glasses are that’s most important.

‘But regardless of the tint, it’s the UV protection that matters — the darkness of the sunglasses only dictates how much light reaches the eye,’ says Roshni Kanabar.

For some, less light reaching their eyes feels more comfortable, so it’s down to personal preference and what you are wearing them for. The most important factor is that the sunglasses have UV protection.

‘Although the darker ones would be more suited to brighter settings such as skiing, the only activity where the tint really matters is driving,’ adds Roshni Kanabar.

By LAW, when driving at night, sunglasses that allow less than 75 per cent of light through are unsuitable and illegal, she says.

Anyone of any age can benefit from wearing them, she adds.

‘I tell the parents of my younger patients that, according to the World Health Organisation, 80 per cent of your lifetime UV exposure occurs between when we are born and when we reach 18.

‘Children have larger pupils than adults, and as the lenses of people’s eyes are often clearer when they are younger, more light is let into them than those of adults.’

Mr Hamada agrees: ‘It’s never too late to start wearing them and the advantages of wearing them for all ages far outweigh any disadvantages, as the aim is to minimise the hours our eyes are exposed to UV light.’

Everyday activities that boost your happiness hormones. This week: Gardening 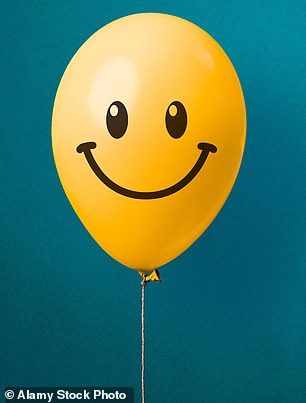 As well as lifting your mood through physical activity (which boosts feel-good hormones endorphins), gardening also raises levels of serotonin (a mood-boosting chemical messenger) through exposure to bacteria in the soil, according to research by the University of Bristol and University College London.

When mice were injected with a bacterium called Mycobacterium vaccae, it activated cells in the brain that trigger serotonin. Professor Chris Lowry, author on the paper (published in the journal Neuroscience in 2007) said these studies ‘help us understand how the body communicates with the brain and why a healthy immune system is important for mental health’.

‘They also leave us wondering if we shouldn’t all be spending more time playing in the dirt,’ he says.

Professor Lowry, now at the University of Boulder in the U.S., has also found M. vaccae can reduce stress and potentially treat symptoms of post-traumatic stress disorder.

Tools of the trade

The history behind medical instruments. This week: The scalpel

While it has been the standard tool for surgeons since Roman times, these days it is mainly used to make the initial incision.

Evidence of knives for surgery has been found from as early as 10,000-8,000 BC. These were initially made of flint or a volcanic glass called obsidian.

As different civilisations developed the tool, the material changed — first copper, then bronze and finally iron. In around AD 100-200, the Romans called the surgical knife the ‘scalpellus’, a derivative of the Latin scalpere meaning ‘to cut’.

From the late 19th century, a greater awareness of infection led to surgical knives being sterilised using steam and chemicals. The need for constant sterilisation led to the development of disposable scalpels in the 20th century.

The disposable scalpel, now the most commonly used scalpel in surgery, usually consists of a plastic handle (which can be reused) with a disposable stainless steel or carbon blade.