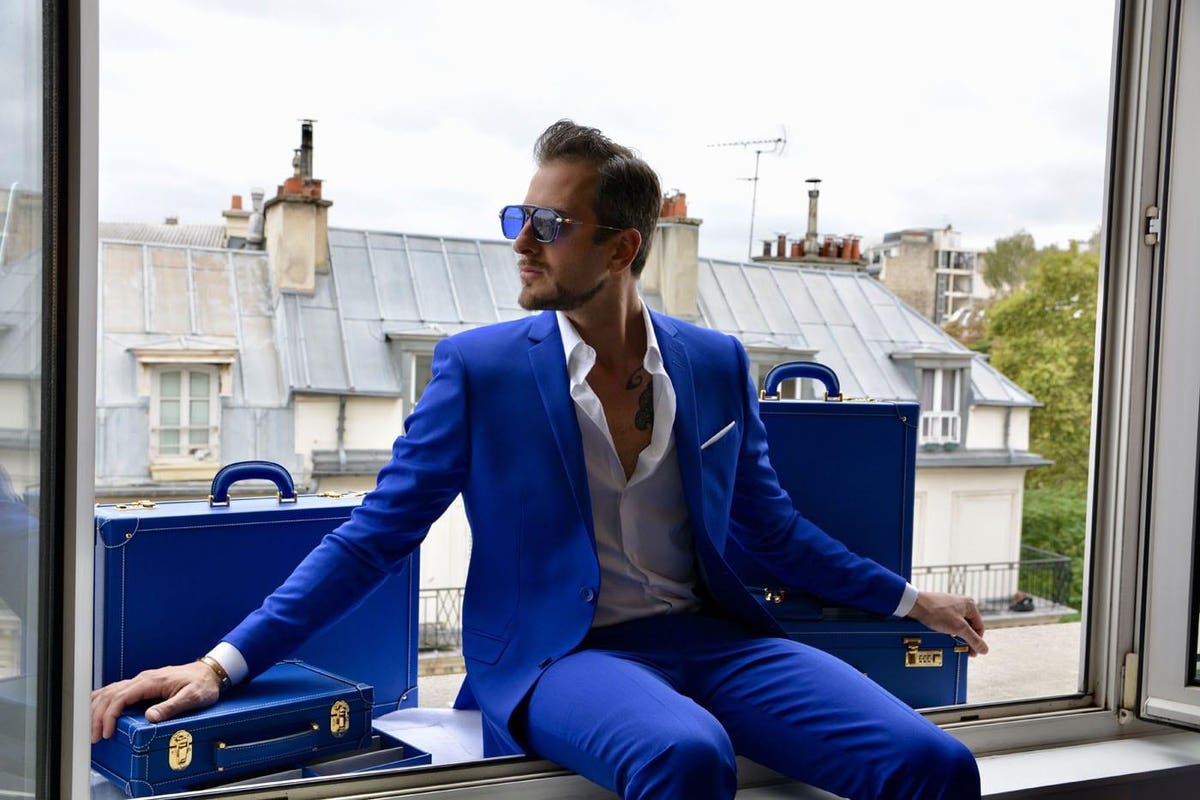 I’ve always had a love-hate relationship with sunglasses.

I spend a lot of time outdoors and also live in Miami which has an average of 248 days of full sun a year. So sunglasses aren’t just a fashion accessory for me. Leaving the house without them can literally give you migraines.

On the hate side, I also lose them perpetually. My first nice pair of Ray-Bans skidded off the dashboard of my VW bus out the open passenger side window taking a left-hand corner too hot. More recently, I left a sweet pair of $600 Zegna sunglasses that my wife gave me at a Bay Area bar after owning them for less than a week (I still haven’t lived that one down).

So a few years ago, I started buying $15 plastic shades from gas stations and CVS just to stop bleeding the money. Suffice it to say that I haven’t been rocking my finest eyewear style in a long time, even as my eyesight continues to deteriorate due in part to the fact that my world view is clouded eight hours a day through cheap, cornea-mutilating optics.

As a writer who stares at a screen more than he sleeps that’s masochism. So last month I decided to do something kind to my eyes (and my crow’s feet) and through a serpentine search online finally stumbled across T Henri, a beposke start-up eyewear brand founded by design and lifestyle entrepreneur Tyler Gelb.

“T Henri is an ultra-luxury, micro-production eyewear brand inspired by the world’s most prized possessions”, Gelb tells me from his home base in Boca Raton, FL when I ask him to sum up his new brand in a few sentences. “We’re on a mission to re-write the rules of luxury.”

When it comes to sunglasses, however, innovation up-market actually is far more difficult than one might think. For starters, there’s not a whole lot to play around with when it comes to radical transformation in design or materials unlike a superyacht. The luxury eyewear space, like time pieces, also has been dominated by legacy labels like Cartier, Jean Paul Gaultier, and Maybach for years. Breaking in and carving out a niche can take years to build brand loyalty and trust.

So when Gelb set out to re-imagine how an up-start, uber-luxe sunglasses collection designed for high-net worth individuals should feel, wear, and look to fit the rarified lifestyles they inhabit, he went back to what he knows best for inspiration: a decade of selling exotic, multi-million dollar, and often limited-edition sportscars to celebrity clientele and high net-worth individuals totaling nearly $1 billion.

“In 2016, I sold a $1.7 million Porsche 918 Spyder and as I was delivering the vehicle, my client retracted the roof and took out a pair of Prada Sunglasses made by Luxottica in massive quantities,” Gelb recalls, “And immediately I saw the lack of congruency. Please tell me how someone with a $1.7 million car, a $50,000 watch, and $800 Ferragamo shoes can wear a $400 pair of sunglasses? It was at that moment that I realized there was space for disruption. And after extensive research and design development, I decided to create that niche eyewear collection that incorporated the most popular supercar elements and designs which could be passed down for generations”.

For Gelb the first challenge in that process began with translating the design, elegance, and performance of a multi-million dollar exotic car into a wiry frame with four hinges and two pieces of glass while simultaneously ennobling to the aerodynamics, ventilation, and engineering of the world’s rarest automobiles.

Fortunately, thanks to his creative background—which included studying fashion and design at Paris’s Sorbonne and dozens of trips to the French Riviera—as well as his pre-existing predilection for finer things like Swiss watches, Gelb already knew where to look: Sabae, Japan.

“The Fukui region of Japan is surrounded by rice fields and rolling hills and the center of it, Sabae, is the Mecca of handmade artisanal eyewear,” Gelb explains. “It wasn’t actually discovered until Jean Paul Gautier began production here in the 1970s using titanium design and construction techniques that no one in Europe or America had seen before. But that changed everything. The Japanese culture is extremely disciplined and respectful and bears a perfectionist mindset. The pride they take in their craft and the end-product produced is unparalleled to any other country in the world—even Italy. And because of the country’s strict cultural respect, Japan’s best artisans have been able to teach their pass down the craft from generation to generation. They also happen to be some of the best engineers in the world which it comes to high-performance design.”

If you’ve never really associated the words “engineering” and peak “performance” with sunglasses before, you’re not alone. For Gelb in partnership with his manufacturers in Sabae, however, that pursuit perfection began with three simple criteria where he believed other brands were lacking—ergonomics, balance, and wearability for long durations of time.

“We put a premium on the craftsmanship at T Henri because that’s something that is not readily accessible in most eyewear brands,” says Gelb. “The expertise and specialized factories in Sabae are some of the world’s best kept secrets, and there are few industries that have artisans who place such high emphasis on achieving aesthetic perfection, balance, and sustainability. We also employ a constructivist mindset, using screws, lugs, and innovative fastening techniques rather than glue, which although leading to higher production costs, creates significantly better long-term wearability and durability. Some of our styles might look bulky and heavy because of people’s experiences with other sunglass brands. But because of the materials our craftsmen use and the shapes and forms that we integrate into our designs even our heaviest looking frames can be worn for hours. We’re also experimenting with new materials like 100% Beta titanium which will make collections like the Vulcan feel almost weightless.”

T Henri, says Gelb, also was founded on the premise that few things that we wear or use on a daily basis say more about who we are.

“From a fashion standpoint, sunglasses as the single most important item for a personal statement,” Gelb explains. “When you’re meeting someone in person, especially for the first time, your first glance is almost always at their face. So eyewear is the first thing people see or notice about you. After reading several studies, I found out that people who wear glasses of any kind are 70% more likely to be perceived as intellectual, intelligent, and well-educated. This creates a massive net of psychological comfort for whomever meets someone wearing glasses.”

First impressions notwithstanding, extraordinary function and fit are what make T Henri’s eyewear most like the multi-million dollar sportscars that were the brand’s original genesis and embody the HNW lifestyle that Gelb set out to capture.

“T Henri’s customers are men and woman are ages 25-55 from higher income demographics with disposable income,” says Gelb. “They typically reside in upscale suburbs or chic urban environments and many are frequent jetsetters, traveling the world, enjoy leisure sports car drives, yachting, or indulging in life’s scarce exclusive experiences. It’s for this reason that we design our eyewear to function as well as the machine you’re using whether that’s a sportscar at 90 mph, a speed boat at 75, or taking off in a private jet. We’ve even designed our own ‘convertible’ test that we’ve done with a ton of different sportscars with different top-down aerodynamics to make sure that our eyewear performs optimally no matter what you’re driving.”

Twenty years ago, renowned luxury Swiss watchmaker Patek Philippe released a marketing campaign that has probably sold more $50,000 timepieces than any other simple because of its tagline: “You never actually own a Patek Philippe. You merely hold onto it for the next generation”.

Geld was 13 when Patek’s ad debuted. So I ask him the most important question about breaking into any ultra-luxury space at the top of the funnel: How do you create heritage and collectibility from scratch without the benefit of already being a legacy brand?

“The luxury, high-fashion eyewear space is very small and the barriers to entry are large from a time, capital, and geographic standpoint,” says Gelb. “But no luxury legacy brand began as an ‘historical brand’. How did Patek Philippe or Louis Vuitton find success in the early years when few knew their names? To create legacy, heritage, and collectibility, you first have to create a high-quality product that’s worth collecting. To do that, you need to honor the roots—the great designers, craftsmen, and pioneers who came before—while at the same time evolving the rules of design and pushing the bar even further. That’s how you make history and create a legacy.

And why we went to the master artisans of old to create something together that’s innovative and new. By implementing the design cues and inspirations from the past century’s most talented exotic automobile designers, we’re also able to create a nostalgic sense of familiarity and a bridge to the golden age of luxury and design that will never lose value.”

On cue with that vision both forward and backwards, T Henri just released its new hyper-luxe Caviar Collection, which debuted last month after two years of extensive design, R&D, and engineering and includes two styles: Hydra and Corsa.

“The Caviar collection is a true testament to T Henri’s manufacturing capabilities,” says Gelb, “Showcasing our highest level of design yet by integrating voluminous, modular titanium parts and introducing the industry’s first two-tone hinge, as well as the industry’s first five-sided titanium end-cap. These pieces are extremely scarce and collectible at micro-production quantities of 75 pieces per colorway. We’ve also already custom set on pair of Caviars with VVS2 Diamond Baguettes in the nose bridge and temple end-caps for a special client that has an estimated value of $70,000.”

As for me, knowing my past relationship with sunglasses, I’ll probably pass on anything diamond studded for my next pair of T Henri’s however. My wife would never forgive me if they fell into the water off of my paddleboard.